Kangna Ranaut was seen covered in blood; the director said – there is no such talent anywhere.

Fans are eagerly waiting for Kangana Ranaut's new film 'Dhaakad.' The producer, Rajneesh Ghai shared a picture from the sets and praised Kangana.

Filmmaker Rajneesh Razi Ghai teamed up with actor Kangana Ranaut for the first time for the upcoming espionage thriller ‘Dhaakad.’ He praised the National Award-winning star for his ‘extraordinary’ talent. On Wednesday, Ghai posted an old picture from the Budapest shooting schedule of ‘Dhaakad’ and wrote, “Reminiscences of shooting days in Budapest.” Happy Republic Day from the entire Dhakad team with this “talent extravaganza.”

The picture shared by Ghai appears to be a behind-the-scenes picture taken on the film sets. In the photo, Kangana has bruises on her face, indicating her high action sequences in the film. Largely set, the film is directed by Ghai and produced by Deepak Mukut and Sohail Maklai. It is a high-octane spy thriller that stars Arjun Rampal and Divya Dutta and many attractive actors. 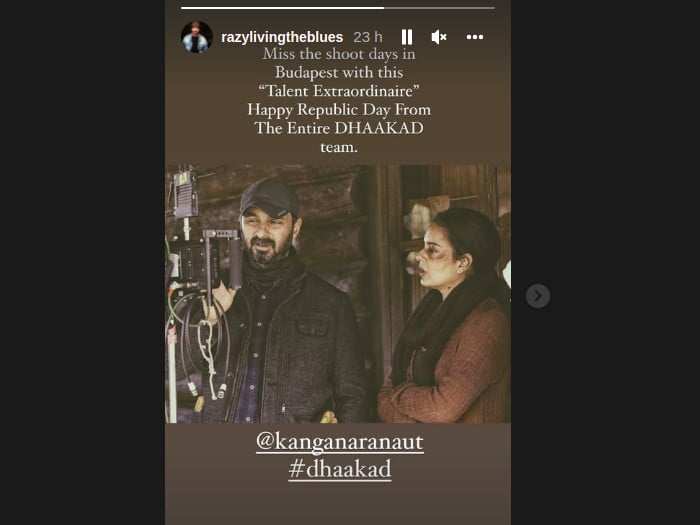 will be the benchmark of career

Kangana plays Agent Agni in the film, which will take her to the layered topic of child trafficking and exploitation of women. The film was shot in Bhopal, Budapest, and Mumbai. Talking about the film, Kangana had earlier said, “Dhaakad is not only a benchmark film for my career, but will also be a turning point for Indian cinema. The film has been made on a large scale.”

The film’s stunts are designed by an international team, while Tetsuo Nagata, an award-winning Japanese cinematographer who has worked in several Hollywood action films, did the camerawork. The makers have postponed the release of the movie from April to May. However, there is no official announcement regarding its release date yet.

Actress Shweta Tiwari apologized for the statement ‘God is taking my bra size’, said – there was no intention to hurt anyone

Update came about Hera Pheri 3, this famous director was approached, know some funny…