Rohit Shetty got upset with Nikki Tamboli’s tantrums, angry over the behavior of the actress!

Actually, this anger of Rohit Shetty broke out during a task. Nikki appears less serious in the show, even before she has been eliminated. In such a situation, Rohit reprimanded Nikki that even earlier she was going to leave the show, and still she is not taking the show seriously. 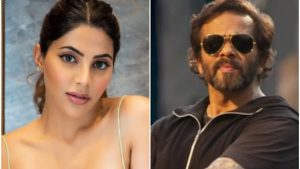 The show is based on playing with dangers, in which celebs have to overcome their fears and perform dangerous stunts. But during a task Nikki could not do it again, Nikki, who has given giveup on many tasks till now, did not work hard on this task either. Actually, during a task on the show, Rahul Vaidya, Shweta Tiwari, Anushka Sen, and Nikki were tied with iron chains.

To open himself, he had to take out the key from the boxes kept in front but the twist was that those boxes were full of insects, spiders, and snakes. Somewhere between them had to find the right key. Everyone tried to do this task but did not even try. Meanwhile, Anushka Sen found the key, where Nikki refused to accept it.

This new trouble will stand in front of Anupama, Vanraj will be furious on Kavya

The company was doing such fraud in the name of Gauahar Khan, the actress shared the post and said be ready for the case