Tiger Shroff was injured during a shooting in the UK, been wounded in the eye, shared pictures

By newz-web Last updated Dec 22, 2021
Tiger Shroff was injured during a shooting in the UK
0 62
Share

London: Bollywood actor Tiger Shroff is currently shooting for his upcoming action film Ganpat. The action sequences of the film are being shot in the UK. Tiger shared the picture and said that he got an eye injury while shooting the action sequence for the film.

Tiger’s eye is swollen, and a black and blue mark is also visible around his eye in the picture shared on Instagram Story. Sharing the picture, Tiger wrote – “Bad things happen too, #ganapath final countdown.” Directed by Vikas Bahl, the film also stars actress Kriti Sanon and Tiger Shroff.

It is Tiger’s second film with Kriti Sanon. Earlier, both have appeared together in Heropanti. This film was the debut film of both the actors. In such a situation, the audience eagerly waits for Ganpat to see the pair together once again. The film’s shooting is already being done in the UK for one month. 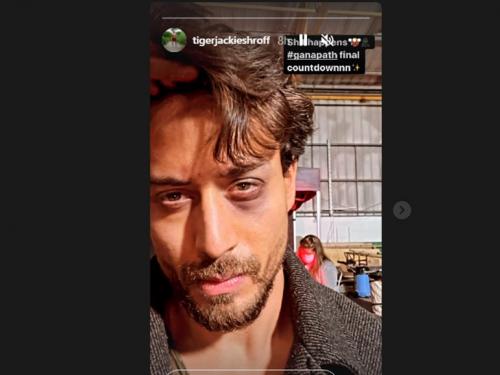 According to a Pinkvilla report, the makers had approached Amitabh Bachchan to play Tiger’s father in the film. Tiger plays the role of a boxer in the movie. According to the story, Tiger’s father will also be in the boxer’s position in the film, for which Amitabh Bachchan was approached. However, nothing is clear yet. The film’s shooting will go on for about two months in London.

A cobra’s entry into Anupama’s make-up room created panic; Sudhanshu Pandey came forward and did the rescue – watch the video.

Shahrukh Khan held a press conference on the success of Pathan, said – I have given…

Video of Ranbir Kapoor leaked from the sets of Animal film, fans excited to see the…